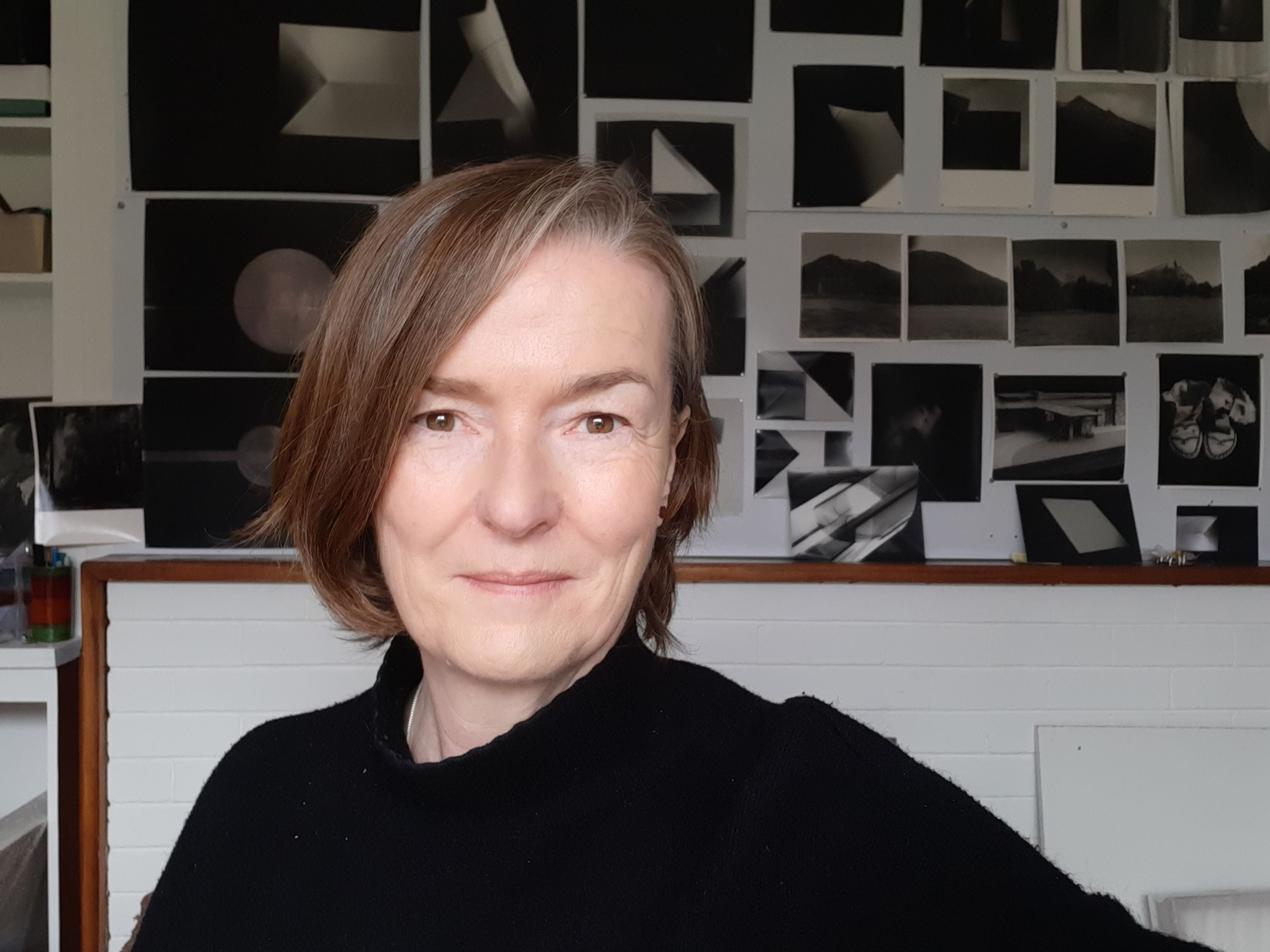 From 2018 Roseanne Lynch spent 4 years making new work which included spending 18 months living in Leipzig, Germany, following an artist in residency at The Bauhaus Foundation, Dessau, and 5 months in Banff following a residency at Banff Centre for arts, Alberta, Canada in 2020.

She make work in response to a Frank Lloyd Wright building that used stand in Banff and to the Bauhaus foundation buildings and buildings material research archive. Following research into the teachings of the Bauhaus Vorkurs, or preliminary course, and the teachings of Johannes Itten in particular, who encouraged students to study the grammar of their materials, her work shifted to respond to this approach. This work resulted in international exhibitions of the work 'Grammar', and expanded to include a broader body of work for subsequent iterations.

Roseanne Lynch is currently working towards an exhibition at The Photo Museum of Ireland in 2023 and a photobook.

Lynch is a P/T lecturer in Photography at MUT Crawford College of Art and Design in Cork and previously at Cork Centre for Architectural Education.

She has been supported by the Arts Council of Ireland, Culture Ireland, Cork city and county Arts offices and is represented by nag Gallery, Dublin www.nagallery.ie

Aidan Dunne of the Irish Times says "Roseanne Lynch's meticulous examination of light in photography is admirably concentrated and reassured."

Work is held in National and International collections, including The National Collection, The Arts Council of Ireland, The Office of Public Works, The Glucksman collection at University College Cork, The Bauhaus Foundation, Dessau, Germany, the board of Ballarat International Fotofestival, Australia and Centre Culturel Irlandais, Paris.

"The 'New Irish Works' catalogue proves an effective way to encounter the works of photographers working in series. In this regard I was drawn back to the pages presenting Roseanne Lynch's 'Place'. The silence of these enigmatic and elusive images- minimal, geometric tonal studies- leaves space for contemplation. It's compelling and sublime work- repeated viewing of which is rewarding. I was reminded of what Ansel Adams once wrote about his take on language and the image: " When words become unclear, I shall focus with photographs. When images become inadequate, I shall be content with silence"
Alison Pilkington.

Two exhibitions took place at the Cork School of Architecture as part of the There There series of photography shows organised by Stag & Deer which took place in a number of locations around Cork in October.

Chinese artist Zhang Kechun’s show The Yellow River consisted of ten photographs, stuck directly on a wall facing the glass frontage of the building. This exhibition space was light and airy and gestured towards the neutral space of the white gallery cube. Roseanne Lynch’s Atmospheric Intermediacies & Activation(s) In Space took place in what could be described as the bowels of the building. The light in the space was low and atmospheric, the walls an unfinished concrete, cables and wires lay exposed. The inside of the building remained unfinished, stalled at the stage before the surface adornments were to be applied which would have brought it into the shiny world of neo-liberal hyper-capitalism. The eruption of the shadow world of creative accounting and financial speculation through the seamless surface of global capital has resulted in a proliferation of these buildings- the ghost estates of Ireland, the ghost cities of China. The materials and style of the abandoned new build the unfinished wood constructions; the plasterboard; the insulation foam have found their way into the work of many artists. A feed back loop appears to be in operation, artists absorb the aesthetic into their practice, the resulting art work then gets displayed in the traditional space of the white cube or more ironically in the ‘pop up’ galleries which have been springing up in unused buildings around the country.

Roseanne Lynch at a talk she gave at Copley Street spoke about the space itself being on show. Her photographs occupied this space in a very subtle way. She exhibited four large-scale pieces, three photographs and one sheet of aluminium. The sheet of aluminium was a dull silver monochrome which reflected back aspects of the space and possibly alluded to the use of silver based processes for capturing images in the early years of photography. Two of the photographs, which were printed onto vinyl stuck directly to the wall, were placed side by side. They depicted an architectural space, which looked very similar to the space of the exhibition; on turning my back to them I discovered they seemed to have been taken from about the spot where I was standing. The place where the third photograph was taken was harder to identify, it seemed to be a photograph of a wall, perhaps it was a photograph of the wall that it covered? The photograph seemed to picture both scars and gouges on the wall and scratches on the print itself. Lynch can be seen to be using the photographs to prompt the viewer to spend time looking at the space of the exhibition as opposed to the work displayed. At her talk she spoke about attempting to get the viewer to experience what she experienced, so the photographs are used as tools, as a way to prompt the viewer to pay a heightened attention to the space itself. Entering an exhibition space asks of the visitor that they become more attuned to their surroundings, that the perceive things with a heightened sensitivity. Do the photographs actually do anything to increase this attention to the surrounding environment? The placing of the photographs in the space in which they were taken foregrounds this question- but it would be lost once the photographs were moved to a different location. They function in this particular space, they are site specific and I’d propose that the show is an installation. Boris Groys in Politics of Installation describes the functioning of the artist’s installation.

“The installation transforms the empty, neutral, public space into an individual artwork—and it invites the visitor to experience this space as the holistic, totalizing space of an artwork.” The photographs in Zhang Kechun’s show measured approximately 24 inches by 16 with a white border of approximately one inch. The prints had a beautiful quality, they seemed to combine sharpness and diffusion, and suggested to me a particular dewy quality of skin. They invited a dual mode of viewing, to look at them as photographs, to admire the particular surface quality of the print, but then also to look through them- to encounter the photograph as transparent and look through them to the scenes depicted. A group of people wearing orange swimming hats accompany a portrait of Chairman Mao balanced on a black rubber ring, the water and sky are virtually indistinguishable from each other, the horizon disappearing into the all over washed out foggy haze; a man sits in small pagoda, atop a structure, which looks like it was built by giant termites; two men up to their chests in water approach a circular stone ruin, perhaps the giant leg of an unfinished bridge. As a viewer I can see through the picture to the scene depicted but I don’t have the ‘local knowledge’ to interpret what is happening within this scene. I can’t know if the diffusion of the light is a result of pollution, if the flooding is the recent result of global warming, dam building or something stretching much further back in time. Zhang Kechun in his statement about the work available at the show describes how in following the course of the river with his large format camera he was able “to quietly watch on the river for the season, stare at it through this journey.” The artist through the use of photography is given the opportunity to look for longer, to spend time in a particular place. The photograph is the result of this time spent watching but it again it seems to be an aid to an increased, heightened appreciation of a place as opposed to an end in itself.

Catherine Harty is a Cork based visual artist.